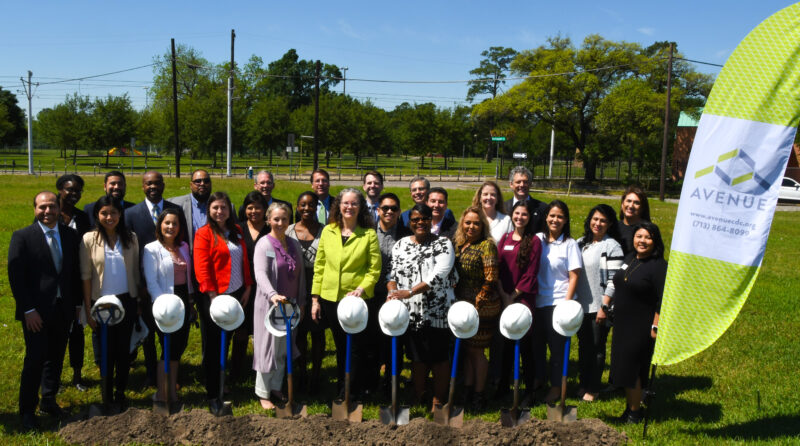 In a press conference today, local nonprofit housing developer Avenue celebrated officially breaking ground on Avenue Center, a new mixed-use community resource center in Near Northside. Construction was kickstarted by a $1 million gift from the BBVA Compass Foundation, which will create opportunities for Avenue’s comprehensive homebuyer education and counseling programs at Avenue Center.

“We are delighted to commence construction on Avenue Center, a facility that will expand resident access to vital supportive services and help enhance the quality of life in Near Northside,” said Mary Lawler, executive director at Avenue. “Thanks to the generous support of the BBVA Compass Foundation, more working families will also benefit from comprehensive homebuyer education and counseling services, as well as special monthly programs including tax workshops. Avenue knows that affordable homeownership is one of the best ways for families to build wealth and we remain committed to doing all we can to help create more sustainable homebuyers in our communities.”

A three-story development, Avenue Center will feature approximately 30,500 square feet of community programming space including a health clinic, an early childhood education center and Avenue’s headquarters and realty office. In recognition of the BBVA Compass Foundation donation, Avenue Center’s first floor, which hosts programming and services in financial and homebuyer education, will be named the BBVA Compass Center for Financial Education when the development opens in early 2020.

“Avenue Center will create ample opportunities for working families in this area to secure their financial health and prosperity,” said BBVA Compass Director of Communications and Responsible Business and BBVA Compass Foundation President Reymundo Ocañas. “BBVA Compass lives stringently by a brand promise of creating opportunities. We have been involved with Avenue since 2010 because they have the same core values as the bank. They are as passionate as we are to elevate and revitalize the communities we call home.This latest funding milestone comes nearly two months after the City of Houston awarded $3.4 million in project funding for Avenue Center, which is located in one of the Complete Communities designated by Mayor Sylvester Turner. In January, Avenue was awarded approximately $2.6 million from the Greater Houston Community Foundation (GHCF) towards the construction of Avenue Center. Those funds were part of a $6.5 million pledge from the United Arab Emirates (UAE) to support Hurricane Harvey recovery efforts.Avenue is currently in the midst of a capital campaign which has raised over $3 million in additional funds for Avenue Center from organizations that include Houston Endowment, The Fondren Foundation, J.E. & L.E. Mabee Foundation, Green Mountain Energy Sun Club, The Brown Foundation, The Hearst Foundation, Trammell Crow Company, NeighborWorks America, Local Initiatives Support Corp‎ (LISC), Amegy Bank, Marek Family Foundation, East West Bank and the Conely Foundation.

Avenue tapped multidisciplinary architecture and engineering firm Page for the design for Avenue Center, which is inspired by the vibrant cultural fabric of the Near Northside community as well as Avenue’s existing development portfolio. Over the past 27 years, Avenue has helped revitalize Houston neighborhoods by leveraging more than $117 million in investments including the development of 200 single-family homes, 918 rental units and 140,000 square feet of commercial space. Last year, Avenue was recognized nationally with the prestigious Jack Kemp Excellence in Affordable and Workforce Housing Award from Urban Land Institute.

In 2017, Near Northside was designated as one of five pilot neighborhoods for Mayor Sylvester Turner’s Complete Communities initiative, which focuses on ensuring Houston communities have the quality of life elements needed for residents to live and prosper in their own neighborhoods. These elements include adequate access to healthcare, educational resources, healthy groceries, parks and green space, quality public transit and economic opportunities. The initiative seeks to address these elements in Houston communities where they are lacking and includes provisions for sufficient quality, affordable housing – something that has become a growing concern across the City of Houston, including in the Near Northside community.